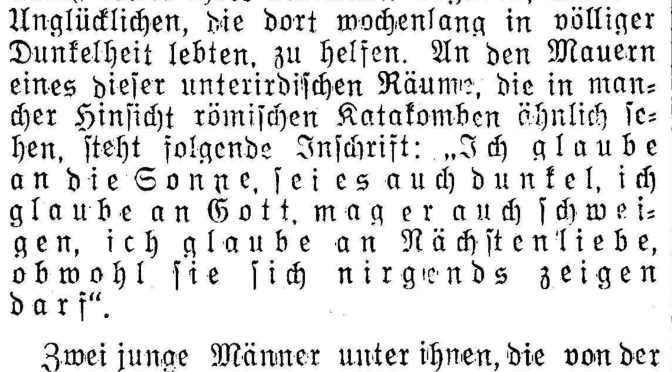 — An inscription on the wall of a cellar in Cologne where a number of Jews hid themselves for the entire duration of the war.

Four years ago, I wrote a series of four blog posts about the complicated history of the “I believe in the sun” quotation given above, and its provenance.

In the first post I wrote about the many variations of the quotation that are floating around, and how the “wall of a cellar in Cologne” attribution has been warped and distorted over the years. In the second post, I wrote that the earliest printed version I could find — in English — was from the July 13, 1945 edition of the Quaker publication The Friend, from London, but the order of the sentences was different than it is above. In the third post, I wrote about the earliest source I found for the quotation exactly as it is shown above. And in the fourth post, I wrote about why I think it’s important to get the story straight, and why it’s irresponsible and disrespectful to pass on versions of this quotation and its attribution carelessly.

In the four years that have passed since I wrote those posts, I have continued to try to track down the origin of the quotation and its story.

And now, dear reader, I have finally found a primary source.

On June 26, 1945, the Swiss newspaper Neue Zürcher Nachrichten published a “special correspondence” from an unnamed reporter writing from Cologne. You can find the original article here, in an amazingly useful archive managed by the Swiss National Library.

And here is a translation of this passage, provided by Nicholas Kontje:

Catholic Scouts had discovered underground passageways which had been unused for many years under old buildings, and these could now serve as refuges from the Gestapo. At one point, nine Jewish fugitives hid here for four months without ever being caught.

When I visited the shelter, I had the opportunity to see the emergency housing, fully equipped with a kitchen, bedroom, living room, radio, a small library, and oil lamps — evidence of a stunning experience. Meals could only be prepared at night so as not to attract the Gestapo’s attention, who would have noticed the smoke during the day. Food had to be supplied by friends who willingly gave up a portion of their rations to help those unfortunate people living for weeks in utter darkness. The following inscription is written on the wall of one of these underground rooms, which in some ways resemble the Roman catacombs: “I believe in the sun, though it be dark; I believe in God, though He be silent; I believe in neighborly love, though it be unable to reveal itself.”

I will write more on this discovery later, after I have had a chance to think about it further. But I do want to at least make the following points.

I have been thinking of how the inscription might be translated, not literally, but into colloquial English that captures the spirit and meaning of the original. My favorite loose translation so far is this:

This entire series of posts is dedicated to the librarians and archivists of the world. Thank a librarian the next time you see one — and remember, always cite your sources.

Cover image: The earliest printed example of the “I believe in the sun” quotation that I have been able to find. Cropped from a digital image of the article discussed in this post.

16 thoughts on “I Believe in the Sun, Part V: The Source”