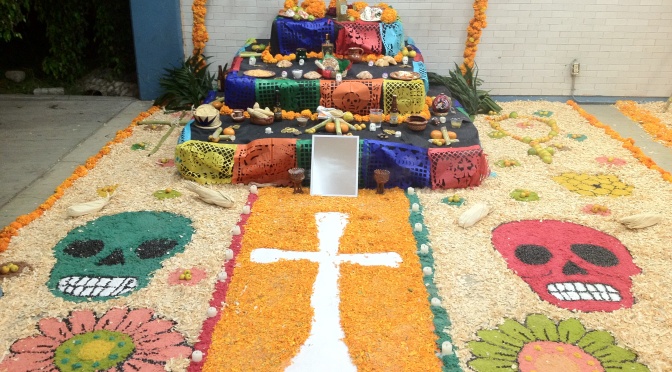 At this time of year, Unitarian Universalist churches often have worship services that reference All Saints’ Day, All Souls’ Day, and/or Día de los Muertos, and that acknowledge and celebrate the influence that the dead can have on the lives of the living. These services might include, for example, the naming of people who have passed away in the preceding year, and the placing of pictures and mementos on an ofrenda or other altar. In this post, I would like to publicize a sonnet by a little-known American poet that can fit in wonderfully with such services. Four years ago I set the poem to music (which anyone can download and print for free), but even if you don’t like the music, the poem itself could be beautiful in a worship service.

Also, I will say something about the history of the sonnet and its author, and how it happens that I found the poem in a book on a shelf in our living room.

We do not say good-bye. Somehow the soul

Keeps all that has been loved with it always.

But of each cherished thing the spirit stays.

These forms, this breathing earth, these radiant friends.

From their remembered splendor I shall wear

Some light about me till my moment ends.

I cannot carve your lovely shape in stone,

Staying awhile its excellence from decay,

Nor fix your beauty into paint. Alone

A look upon my face will sometimes say

How beautiful are the things which I have known

That came from earth, that turn again to clay.

Here is a recording of my SATB a cappella arrangement of the poem, and here is the score, which is free to download and print. 2

The Lawrence Lee who wrote this poem was a Southerner, born in Alabama in 1903. There is a brief biography of him on the Kent State Library page that lists the collection of his papers held by the library. His book Tomorrow Good-bye is hard to come by; its WorldCat library entry lists copies in only 23 libraries. The catalog entry also notes that only 200 copies were printed.

So how did two of those 200 copies wind up on a shelf in our living room?

What the Kent State biography doesn’t mention is that Lawrence Lee was friends with my wife Bella’s grandparents; Bella’s grandfather Lambert Davis worked for the Virgina Quarterly Review in the 1930’s, so he and Lee ran in the same literary circles — and in fact Lee was best man at the marriage of Lambert and Bella’s grandmother Isabella. One of the two copies of Tomorrow Good-bye on our shelf is inscribed to Lambert and Isabella, and includes a hand-written poem 3 that mentions that Isabella is “large with your first leaping child” — a child who would grow up to become Bella’s mother.

Thirteen years ago, I pulled one of these copies off our shelf of old, unusual, or inherited books, and leafed through it for the first time. It contains only five poems, all sonnets, and We Do Not Say Good-bye is the fifth. It stood out to me, though — because at that time, thirteen years ago, close friends of ours were facing a great loss, and the poem spoke to that loss.

Lawrence Lee died in 1978. Bella’s grandparents lived longer, but by the time I found Tomorrow Good-bye on our shelf, they had passed away as well. And yet this book, written by a man now dead, and given to friends now dead, had found its way to our living room, and spoke meaningfully to us of loss and memory. All Souls’ Day and Día de los Muertos celebrate exactly this connection we have to those that have come before us, and Lawrence Lee’s own words, shining on the air, remind us of the beauty of those we knew who have turned again to clay.

One thought on “We Do Not Say Good-bye”